AIO water coolers are a step above conventional air-powered coolers. They take classic liquid CPU cooling and simplify it, through both the build of the cooling system and the cooling process itself.

You might be eager to integrate an AIO cooling system into your PC build immediately, but finding the best AIO water cooler for your computer tower can be tough and depends on a variety of different things.

We’re here to let you know exactly what these things are, as well as present you with ten top-notch AIO water coolers for your benefit. You’ll want to take note – all of the AIO coolers mentioned below are exceptional!

The Ideal All-In-One Water Cooler: Separating the Stallions from the Donkeys

The best AIO water cooler won’t jump out at you at soon you start your shop. If you pay attention to the information below, however, you’ll have an easier time separating the best water coolers from the ones that won’t cut it for your CPU.

Typical-sized water coolers will be compatible with most computer cases while bigger ones, such as those that are thicker than 240mm, will have to mounted differently.

Ultimately, you’ll have to take into consideration the amount of fan openings your computer case has on it. For the most part, each fan opening’s surface area is 120mm.

Fan thicknesses start at a base of 25mm and can be as thick as 49mm. 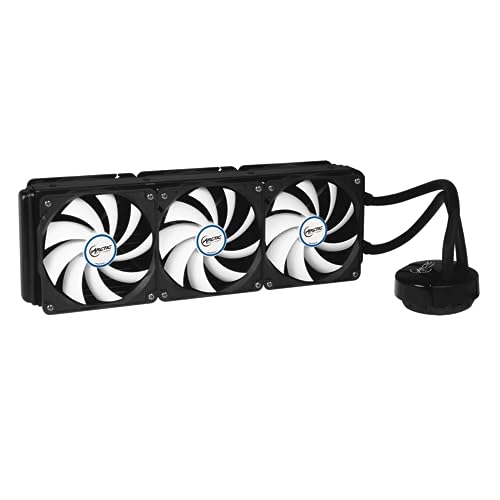 With six fans, trapped heat will be the least of your worries – the ARCTIC Liquid Freezer 360 AIO water cooler system will have your CPU relaxed, much like you will be once you realize how great this cooling system is.

Six fans might seem like a lot, but the set is compatible with a wide range of computer tower case sockets, making quick and successful setup a breeze. The 120mm fans are to thank for the Liquid Freezer 360’s excellent compatibility!

It also comes with rubber pipes that make both installation and performance free of problems – the flexible rubber material makes it easy to position the entire apparatus in a safe, computer-friendly manner.

The ARCTIC Liquid Freezer 360 is the best AIO water cooler for your computer, being widely compatible with many tower cases, well designed for easy installation, and energy efficient. 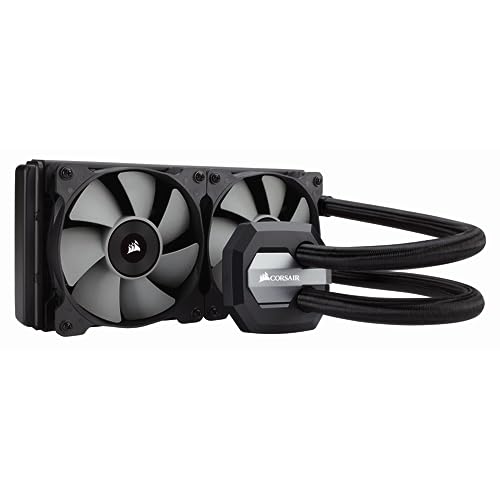 Corsair shows us that it can make much more than computer mice and keyboards with its Hydro Series H100i AIO water cooler. This powerful water cooler will keep your CPU watered down and running smoothly.

A great feature of the H100i is the software that comes with it. You’ll be able to monitor, from your screen, the speed, lighting, and temperature of the cooling system. You can make adjustments as well if it’s not performing to your standards!

The radiator is a powerful and large, at 240mm in surface area, giving both power and compatibility to your computer and its tower.

If you are to order this cooling system, be aware of the fact that it doesn’t come with a retention bracket; you’ll have to order it, for free, off of a separate website.

The Corsair Hydro Series H100i is a great cooling system to purchase for your computer, with a lot of radiator surface area, customizable settings, and stellar cooling performance. 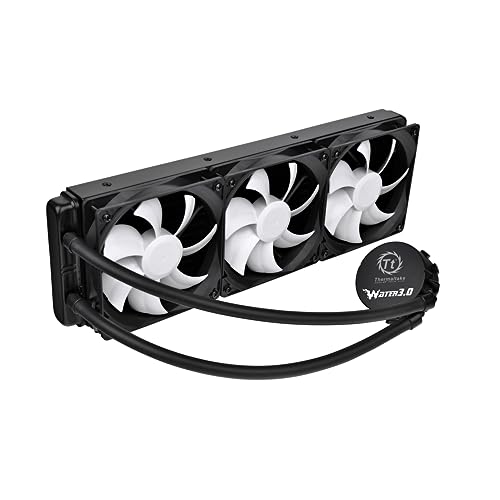 This All-In-One cooling system is a massive way to keep your CPU in the shade. With an operational area of 360mm, an excellent warranty, and easy installation, this Thermaltake AIO system is a nice buy.

Don’t sweat a fault in its performance, even if it arrives at your door in poor shape! A three-year warranty exists to ensure that any mistakes or issues are fixed at no cost to you.

There isn’t much you can do to mess it up, however; it’s easy to install and even easier to operate efficiently.

If you want an excellent warranty, easy installation, and superior fan power, this cooling system is one you’ll want to get your hands on.